One of the few Britons to accompany the American soldiers on their epic “Longest Day” invasion of Omaha Beach 40 years ago was Leading Aircraftsman Stan Mallett from Exeter.

Just 20 years old at the time, he was a member of an RAF radar unit attached for the invasion to the American 1st Division.

Because of the scarlet “1” badges they wore, the Americans were known as the “Big Red One” division.

Mr Mallett, of Herbert Road, who now works at Silverton Paper Mill, told the Express and Echo, “Our job in the radar was to guide support aircraft for the invasion.”

“You ask what I was doing on the longest day of June 6, 1944. I was on Omaha Beach witnessing the heroism of the Big Red One division. I was wet through and doing my best to keep my head down. There were so many heroes there. Most of them died with nobody to record their bravery. Now, 40 years later, it is like remembering a movie, though I saw no John Waynes or Robert Mitchums on that beach. What I saw was ordinary men doing so much that seem impossible, like our padre whose bravery won him the Military Cross and the timid orderly who worked with him and probably never could explain to his friends back home how he came to win the Military Medal.”

The Americans Mr Mallett was accompanying tried to land at 11am, but there was a direct hit on their support ship, so they pulled back and went in again at 3pm.

“It was chaos. This was the beach where everything seemed to go wrong. When the ramp of the landing craft went down we were too far off the beach and had to struggle through the water,” he says. “We had an officer called ‘Hoppy’ Highfield, nicknamed that because he walked with a limp, having survived plane and motor racing crashes. I can remember staying really close to Hoppy hoping that his luck would somehow protect me too – but my morale took a dive as the ramp went down, and the leather flying jacketed figure by me vanished: hit by a German sniper. This was the day when Hoppy’s luck ran out and mine held good.”

“Blazing tanks blocked the exit from the beach and it was real chaos for hours. The memories come back of the young American who used his jeep marked with a red cross to pick up the wounded with no thought for his own safety, and I am still impressed by the strict observance of of those red crosses by the German troops who could have blown the jeep to pieces at any time.”

“There was also the sergeant, Humble by name, but not by deed, who was blinded as he tried to retrieve our aerial lorry from the sea.”

“There were two Germans who surrendered to me. They were twice as scared as I was.”

“Then I remember an American officer who yelled ‘Let’s get the hell out of here!’ and somehow we did. So that, a few months later, I had the wonderful experience of being with the French column which liberated Paris from the Germans.”

During that “longest day” Leading Aircraftsman Stan Mallett and his RAF pals had to discard their RAF uniforms and put on American battle fatigues. They had discovered that when their RAF blue serge became wet, it was easily mistaken for the field grey of the enemy soldiers, and the RAF men were likely to be shot in mistake by the Americans. And right through to Paris, the RAF men wore khaki while working with the Yanks, rather than their traditional RAF blue.

His radar unit was set up in Paris to help protect the French capital from anticipated enemy reprisal raids. And while there Stan Mallett became the star personality of one of the war’s happier and most famous pictures. It shows him riding a bicycle along the Champs-Elysees in Paris with a pretty young French girl as passenger on the front luggage rack. “I don’t know who she was,” says Stan. “The British Sunday newspaper photographer Bill Turner just asked her to pose with me for the picture which was published in all British Sunday newspapers on September 3, 1944. I’d just love to meet her again. It would be a bit of luck if I did during a return visit I plan to the landing zone and to Paris this summer. I’m hoping to find the graves of many of my friends like Hoppy Highfield who gave their lives on that longest day. But this time I’ll be going back in a luxury coach instead of a landing craft. It made me smile when Debbie, the girl in a local travel agent asked if I wanted to be insured. I said I didn’t have any insurance last time and people were shooting at me then. She replied ‘Ah but with our policy you get £10,000 if they hit you.’ So this time I’ll be armed with a camera and an insurance policy, and I look forward to returning with happier memories and some photographs to back them up.” 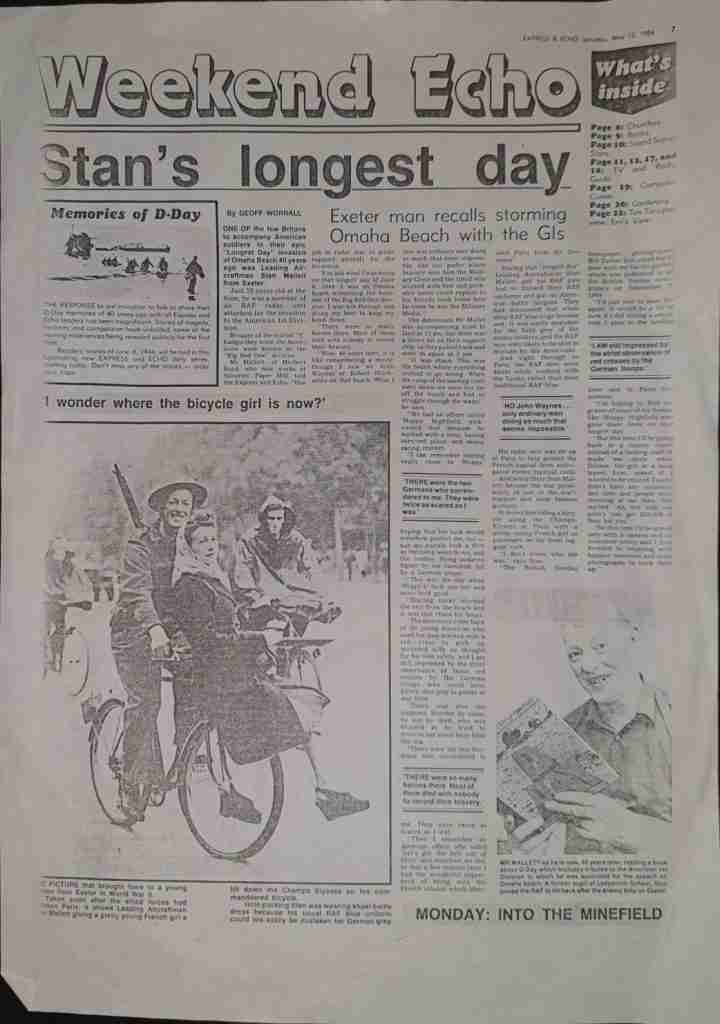