Normandy Veteran, Les Dobinson has been a strong supporter of making the story of 21 BDS known to the outside world and through his unstinting hard work and perseverance, he organised and masterminded a fitting long-term memorial to the men of 21 BDS and 15082 GCI who landed on Omaha Beach on 6th June 1944.

In collaboration with an Anglo-Dutch group called “Deep Respect”, a stone monument was commissioned to be placed at the far west of Omaha Beach just off the beach at the coastal seaside village of Vierville-sur-Mer. It was made in time for a formal unveiling on the 70th anniversary on 6th June 2014 by the Royal Air Force attaché to the Embassy. It was a fine and moving day and a most fitting tribute to the brave men who landed 70 years earlier. 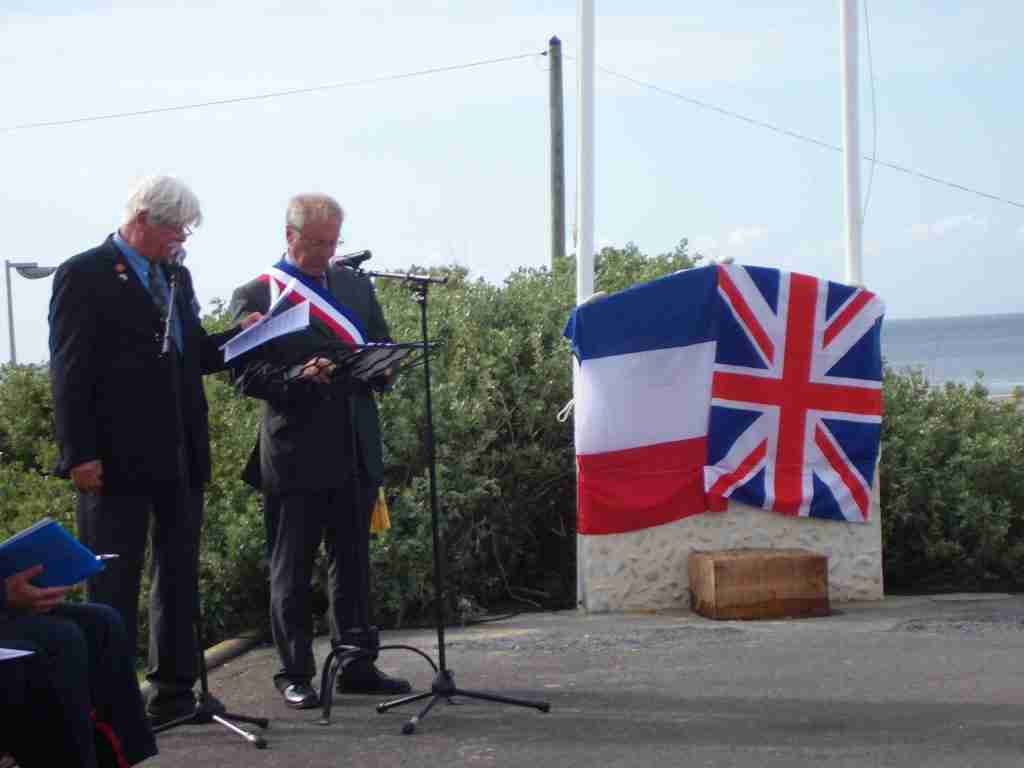 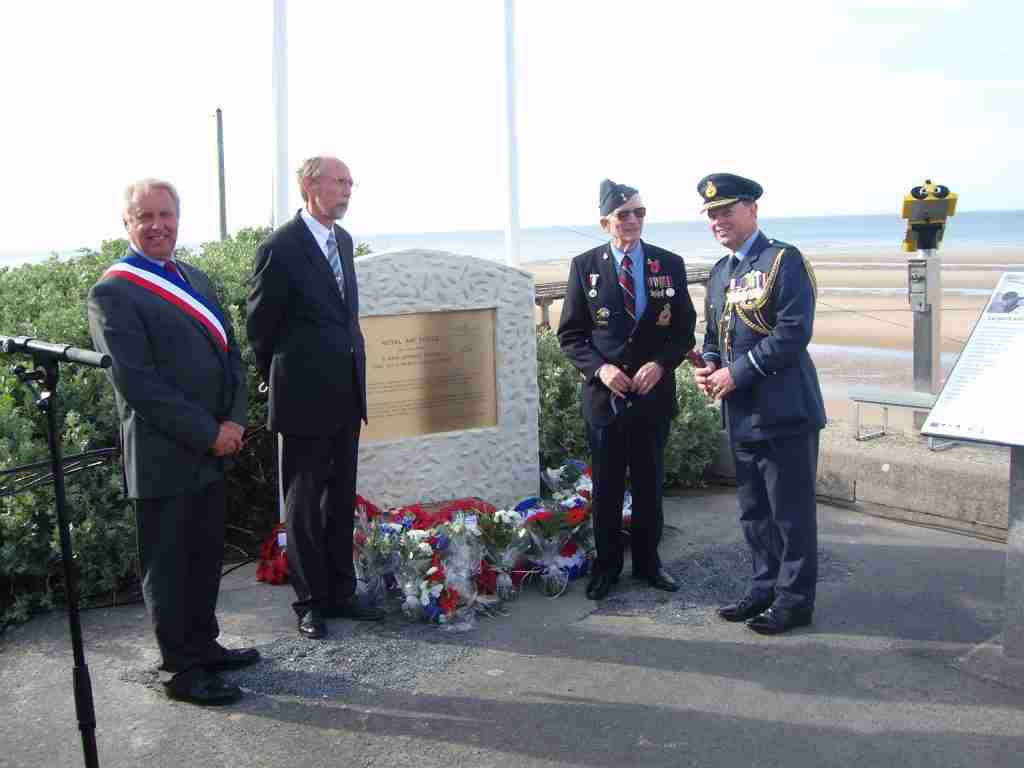 Some people will be familiar with the fact that during the whole of WW2 a total of 10,386 Military Crosses were awarded. Few people will know that, of these, just 69 were awarded to Officers of the Royal Air Force. But just a privileged few are aware that four of those 69 Military Crosses, together with two Military Medals, a BEM and a Croix de Guerre were awarded for the bravery of our Chaplain, our Medical Officer, the Commanding Officer, the Chief Technical Officer and others of the 120, or thereabouts, Radio/Radar technicians of the RAF, who were serving with the RAF Radar Unit that disembarked from Tank Landing Craft onto Omaha Beach on D-Day, at 17.00 hours, with their 27 specialised vehicles that were fitted with Radar and Radio Communications equipment. They were met with heavy fire from German 88mm artillery and heavy machine guns. From then, for many hours, our Medical Officer and Chaplain, both wounded, continually toured the beach under fire to bring aid and comfort to the American wounded, and the last rites to those nearing death.

This RAF Unit is identified as 15082 GCI. Its function was to protect the American beachhead, and American assault troops, from air attack by using its Radar equipment to locate the position and altitude of enemy aircraft and, by means of direct radio contact with RAF fighter aircraft, to direct them to intercept and engage the enemy aircraft. This was a facility that the US Military were unable to provide themselves at that time. An attempt to land this non-combatant unit at its planned 11.30 hrs was aborted for lack of space on the beach.

The damage to the RAF vehicles during the landing was such that only six of the 27 vehicles that disembarked were sufficiently serviceable to be driven off the beach when, many hours later, an exit had been cleared by a bulldozer that, still under fire, had managed to negotiate a passage between the hundreds of dead and wounded American troops and damaged vehicles.

The brave RAF technicians of this Mobile Radar Unit, and its supporting Mobile Signals Units, having themselves sustained 47 casualties, including one Officer and nine Other Ranks killed and one missing, spent the night still under fire attending to their own casualties, as well as many of the wounded GIs, and burying their dead comrades on the beach.

Having also survived a bombing raid by Junkers 88 during the night, with the approach of dawn attempts were made to salvage damaged equipment from the beach and the sea, sufficient for the Unit to become operational on D+2 from a temporary site hastily chosen by US General Timberlake, the planned designated site being still in enemy hands.

With the element of secrecy that surrounded Mobile Radar and Signals Units at that time, and their close proximity to the front line, documented records of individual active service units are minimal and such information as exists depends largely upon the individual testimony of surviving veterans. However, “official” confirmation of 15082 GCI’s presence on Omaha Beach, together with the RAF’s own Beach Unit (21 Base Defence Sector), can be found on page 18 of the .pdf file that is downloadable from The Assault Landings in Normandy, Order of Battle — Defence Academy of the United Kingdom.

The eye-witness testimonies of those who survived that day reinforce my memory of the discussions I had with some of them a few days after the events. A copy of the testimonies, on CD in English, has been lodged with the French “Deep Respect” Association for translation; they also are discussed on the following website http://www.ww2talk.com/forum/allied-units-general/18407-r-f-units-d-day-landings-omaha-beach.html

As for me, I served as one of a dozen Radio/Radar Technicians who formed the advance echelon of a Mobile Signals Servicing Unit (MSSU). This was a centrally located unit to provide specialised support for the wide range of mobile communications and surveillance units in event of equipment failure. It was always planned for my Echelon to come ashore with 15082 CGI, then to deploy near to Cherbourg to serve the many mobile signals and radar units that would occupy isolated sites throughout the American Sector. Meanwhile, 15082 GCI were to make their way towards Paris to contribute towards the air defence of the American liberation troops. The remainder of our MSSU was planned to arrive from England some weeks later to serve in the British and Canadian Sectors as the battlefront broadened and many more Mobile GCI and Signals units became operational throughout France.

It seems that my Canadian friend, Muir Adair, is now the only living veteran of 15082 GCI. He was the Technical Flight Sergeant of the unit, and now advanced in years, lives in retirement in Vancouver. He, and the son of the then Squadron Leader Best, MC, were of great assistance in providing the bulk of the information, that I have archived on the ww2talk website. I decided to do this after receiving presidential invitations to attend the 60th and 65th D-day Anniversary ceremonies, in 2004 and 2009 respectively, at the Normandy American Cemetery, where I was horrified to discover that no one from military or political circles, neither British nor American, was aware of the service that the RAF had rendered here on D-Day, nor that some of our comrades lost their lives here and many more were gravely wounded. This was a situation that I vowed to remedy.

Thus, as possibly the last British veteran of this operation, it is left for me to see that the vital role that the mobile radar and signals units of the RAF played in the air defence of the Omaha beachhead, and thence throughout the battle of Normandy, through Belgium and Holland, into Germany, receives just and proper recognition. This objective is now achieved by today’s unveiling of a dedicated memorial plaque at Vierville-sur-Mer, so that those of my comrades who rest forever in the Bayeux cemetery, and the others whose remains are yet to be recovered, are always remembered. This has now taken place thanks to the French “Deep Respect” Association, to Monsieur Oxeant, and the Mayor, his Council, and the citizens of Vierville-sur-Mer. I offer many thanks to you all on behalf of these old comrades.