Casualties of 21 Base Defence Sector

Initial identifications of the eleven fatalities resulting from the Overlord landings on Omaha Beach on D-Day, 6th June 1944 assumed that all of the men killed were members of the Royal Air Force.  When the War Graves Commission were asked to assist in identifying who all of these casualties were, a list was supplied of one Officer and ten Other Ranks, six of whom are buried in the Bayeux War Cemetery, their remains having been moved there subsequent to the landings once the Cemetery was established after the War.  The remaining five individuals were stated to have been commemorated on the Runnymede Memorial. Naturally enough, this information was accepted without query, it being assumed that the bodies of the five thus commemorated at Runnymede had either been damaged when killed to such an extent as to prevent identification, had been completely lost during the mayhem of the day or the location of the battlefield graves had been lost and their bodies could not be found to be re-interred at Bayeux.

For a long time this was accepted without query, but during the course of checking information on the website “The RAF at Omaha Beach” for Mr Peter Best, the son of Squadron Leader Norman Best who landed with GCI 15082 on D-Day, doubts began to surface about the men named on the Runnymede Memorial, specifically about whether they had indeed been members of GCI 15082 or had been members of Signals Units attached to that Unit.  Investigations located their Units and where their Units had been during D-Day and it appeared that all five of the men who are commemorated on the Runnymede Memorial belonged to Units which landed with British and Canadians on either Sword, Gold or Juno beaches and therefore were clearly not of or attached to GCI 15082.  This left a problem since it was then necessary to re-examine available records in an effort to locate the five men killed as stated in the Operations Record Book (ORB) of No. 21 Sector, the parent unit of GCI 15082.

Initial checks did not reveal any obvious candidates and so an exhaustive check was carried out of all RAF Officers and Other Ranks who were killed on or immediately after D-Day (so as to cover any who may have died later from wounds received).  The vast majority of those listed were aircrew and could be immediately ruled out, leaving only a very few names for checking.  Strangely, once the Units of these few had been ascertained it was possible to discount these also as they had, without exception, been part of Units which landed on Sword, Gold or Juno beaches.  The various references to casualties on D-Day in the Operations Record Book of No. 21 Sector were quite clear in stating at least ten and probably eleven fatalities were sustained by the Unit but frustratingly, apart from naming the one officer killed (Flight Lieutenant Highfield) the identities of the remaining Other Ranks remained elusive.  It seemed that the mystery was likely to remain unresolved.

However, a later reading of the ORBs led to a breakthrough when it was noted that mention was made of an Army Unit attached to GCI 15082, namely No. 16 Air Formation Signals, and a further search revealed the names listed below of another 4 soldiers and possibly one other who lost their lives at Omaha Beach.

If only the ORB of No.21 Sector had referred to them as soldiers and not simply as Other Ranks, their identities could well have been verified much sooner.  However, as we know only too well, the officers and men of GCI 15082 and No 21 Sector were extremely busy at the time with much more urgent matters and we have to be thankful for the information provided, however small, which has allowed the men to be properly identified and to be suitably commemorated albeit much later than was originally intended.

Airman Killed in Action who is Buried in Bayeux War Cemetery

This airman is believed to have died of wounds received on 6th June 1944 during the landing phase.

Soldiers of No. Air 16 Formation Signals attached to GCI 15082 who were Killed in Action on Omaha Beach on 6th June 1944 and are Buried in Bayeux War Cemetery

Some accounts give the number of 21 Sector personnel killed as being eleven.  While the ten listed above are considered to be definitely from No. 21 Sector or attached Units, there is one other soldier from No. 16 Air Formation Signals whose remains are buried sufficiently close to the other ten fatalities to be a possible contender for the eleventh fatality, but there is insufficient evidence to state this conclusively  He is: 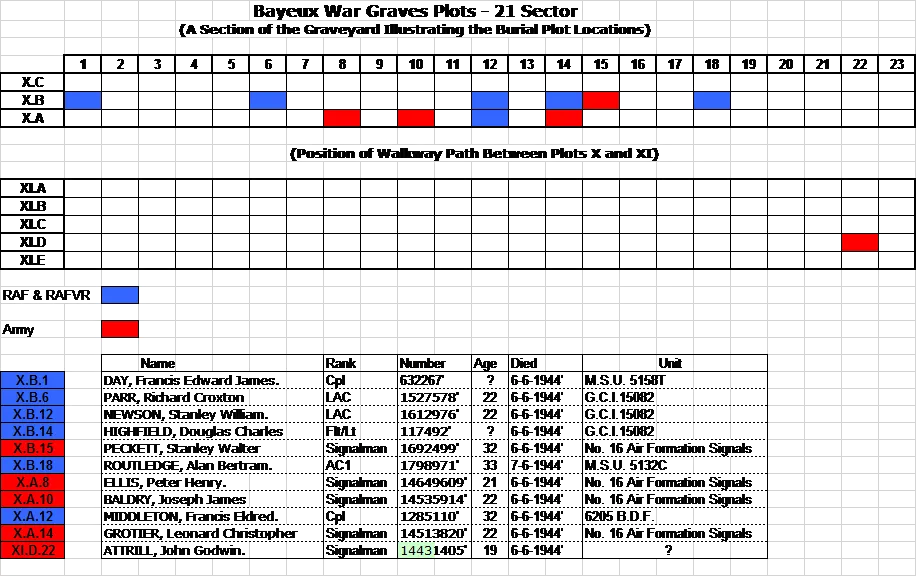